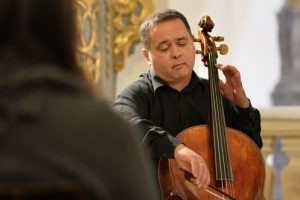 Cellist Krešimir Lazar was born in Varaždin. He finished elementary and high music schools in his hometown. He graduated from the Music Academy in Zagreb, in the class of Valter Dešpalj, where he also received his master’s degree. He has won awards at home and abroad, including the 1st prize at the Alfredo Marcosig International Competition in Gorizia (Italy), the Croatian Radio and Television Amando Ivančić Award, the Rector’s Award of the University of Zagreb, the Dean’s Award of the Zagreb Academy of Music, the Croatian Music Institute Award and the Association of University Teachers and Other Researchers in Zagreb. He has played in concerts in several European and Latin American countries. He has performed as a soloist with the Zagreb Philharmonic, Varaždin Chamber Orchestra, Croatian Baroque Ensemble, Croatian Chamber Orchestra and HGM Jazz Orchestra. He is the head and soloist of the Varaždin Chamber Orchestra, and is the soloist and co-founder of the Camerata Garestin ensemble and the Amadeus trio Zagreb. He is a permanent collaborator of the HRT Symphony Orchestra. In collaboration with harpsichordist and organist Krešimir Has, he won the Jurica Murai Award for a concert as part of the 41st Varaždin Baroque Evening Festival 2011, which is awarded by the festival jury. He is employed as a fulltime professor at the Music Academy of the University of Zagreb. 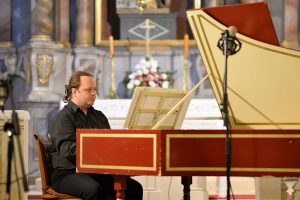 Organist and harpsichordist Krešimir Has directed his artistic activity towards the music of the High Renaissance and Baroque, regularly performing on all relevant music stages, as well as especially specialized stages within the Republic of Croatia, as well as performing abroad. After completing his organ and harpsichord studies at the Academy of Music in Zagreb, and training at the Musikhochschule Lübeck, he is a member of the Croatian Baroque Ensemble, the Musica da camera and Erato ensembles, and is a regular associate of the Varaždin Chamber Orchestra. He is a co-founder of the Small Harpsichord Festival and the Camerata Garestin ensemble. He has collaborated with world-renowned artists in the field of interpretation of High Renaissance and Baroque music (Eggar, Cummings, Mackintosh, Niquet, Mitchell, Marcon, Haselböck, Onofri and others).

He has won several awards and recognitions for his artistic musical work, including the third prize of the international organ competition Andrea Antico da Montona, held in Umag in 2004, and whose judging panel was chaired by the world’s greatest role model in the interpretation of organ and harpsichord old music Gustav Leonhardt. In 2010, he met the conditions for election to the title of artistic university title of assistant professor of organ playing. As part of the 41st Varaždin Baroque Evenings Festival in 2011, the expert jury of the Varaždin Baroque Evenings awarded the concert performance of Krešimir Lazar and Krešimir Has with the Jurica Murai Award.