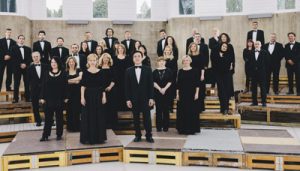 The Croatian Radio and Television Choir was founded in 1941 for the needs of the then radio program. Acting primarily as a chamber ensemble, over time it grew into the first large professional choir in Croatia. The choir performed publicly for the first time on September 8, 1942 in the Zagreb Cathedral with the then Circle Station Orchestra. It was also the first public concert of the ensemble of the radio station, and was conducted by Lovro pl. Matačić. In their first years, the choir’s repertoire was formed by conductors Mladen Pozajić, Dragan Gürtl and Boris Papandopulo, and then continued by the chief conductors Sergije Rainis, Vladimir Kranjčević and Igor Kuljerić, whose work and long-term leadership left a strong mark and whose compositions are today permanent part of the Choir’s repertoire, and Tonči Bilić. It was at the instigation of Tonči Bilić that the independent subscription cycle Sfumato was launched in 1998, as part of which numerous compositions by Croatian authors and anthological choral opuses of world heritage were presented for the first time. Also at the initiative of maestro Bilić, the HRT Choir was admitted in 2016 to the association of the most prestigious European chamber choirs Tenso.

The HRT Choir won the Milka Trnina Diploma of the Croatian Society of Music Artists for outstanding artistic achievements in 2004 based on the performance of Boris Papandopulo’s Croatian Mass, and a series of Porin discography awards. Maestro Tomislav Fačini is the head of the Choir as the chief conductor.