Christoph Willibald Gluck
Dance of the Furies from the opera Orpheus and Eurydice, Wq. 30 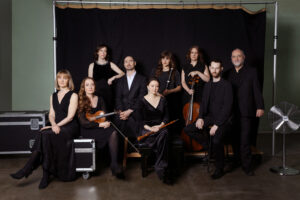 The Irish Baroque Orchestra is acclaimed as Ireland’s flagship period music ensemble and delivers historically-informed performances to the highest standards across Ireland and abroad. Under the artistic direction of Peter Whelan, scholarship and musical excellence converge in a unique way through the IBO’s work. This creates an original offering like no other organization on the Irish classical music scene. Through this integration of research and practice the very idea of an orchestra is defined afresh, providing an unusual and enriching experience for today’s audiences.
As an ambassador for the stories of Ireland’s musical past, the IBO uses its unique perspective to develop the growing store of knowledge surrounding the very early days of Baroque and Classical music in Ireland. The IBO’s research, recordings and performances offer the people of Ireland a new opportunity to reevaluate and reclaim their cultural heritage, while also engaging the Irish diaspora through the increasing
global reach of this work. Even Handel’s Messiah – an annual touring highlight in the IBO calendar – is a to Dublin’s cultural life in 1742.
In 2019 the orchestra released Welcome Home Mr Dubourg on Linn Records, which was profiled in the Irish Times and on BBC Radio 3 and met with positive reviews across Europe. The second album, The Trials of Tenducci featuring Irish mezzo-soprano Tara Erraught, came out in March 2021 and went straight to the top of the iTunes classical chart in Ireland upon its release. It has enjoyed critical acclaim world-wide, receiving notable praise from Gramophone Magazine, France Musique and BR Klassik. In February 2022 the IBO made its debut to critical acclaim at the Linbury Theatre, Royal Opera House, London with Vivaldi’s Bajazet, a co-production from Irish National Opera and the Royal Opera House. They subsequently won an Olivier Award in the Outstanding Achievement in Opera, category for their work on this production.
The IBO is committed to developing the scene for historically-informed performance in Ireland, and works with a number of partner organizations across the country to ensure its continued growth for future generations. The Irish Youth Baroque Orchestra gives students the opportunity to work intensively on elements of period style, and IBO’s Apprentice Scheme supports students as they take their first steps into the profession. An annual side-by-side scheme with the Royal Irish Academy of Music is a crucial, recent development in the IBO’s educational portfolio, as is a new Baroque Strings class aimed at amateur adult string players.
The Irish Baroque Orchestra is generously funded by the Arts Council / An Chomhairle Ealaíon. It also receives financial support from Dublin City Council and Culture Ireland. The orchestra has its own collection of period instruments, purchased with the assistance of an Arts Council capital grant and the Department of Arts, Heritage and the Gaeltacht. The IBO is resident at the National Concert Hall, Dublin and as of 2021 is an ensemble member of the Réseau Européen de Musique Ancienne (European Early Music Network). 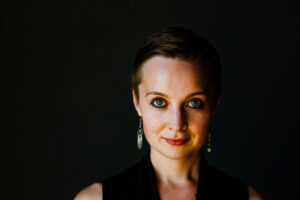 Winner of the Dame Joan Sutherland Audience Prize at Cardiff Singer of the World 2019, British mezzo- soprano Katie Bray has become known for her magnetic stage presence and gleaming, expressive tone. Recent roles for Opera North include Hansel Hansel and Gretel, Rosina Il Barbiere di Siviglia, Varvara Katya Kabanova, Louis XV Chair/Female Cat/Owl L’enfant et les sortilèges, Lola Cavalleria Rusticana, and Nancy Albert Herring. She has also sung with Irish National Opera in the title role, Griselda, English National Opera as Daughter Akhnaten and in The Way Back Home, Scottish Opera as Lucilla La Scala di seta, Welsh National Opera Zerlina, Don Giovanni, Opera Holland Park Mallika Lakmé, English Touring Opera Zenobia Radamisto, Minerva Il ritorno d’Ulisse in patria and Satirino La Calisto, Grimeborn Festival as Charlotte Werther, and with Garsington Opera as Zulma L’Italiana in Algeri, Zaida Il turco in Italia, and most recently Isolier Le Comte Ory, for which she received great acclaim. She also recently performed in a staged cabaret of ‘songs banned by the Nazis’, Effigies of Wickedness, at the Gate Theatre, Notting Hill, in collaboration with English National Opera.
Equally at home on the concert platform, Katie Bray has performed in prestigious venues such as the Wigmore Hall, Cadogan Hall, and the Holywell Music Room and she appears regularly in the London English Song Festival, where she has directed concerts at Wilton’s Music Hall, as well as at the Oxford Lieder Festival for which she recorded a disc of Schumann songs with Sholto Kynoch. Other recent highlights include a semi-staged version of Wolf’s Italienisches Liederbuch with Christopher Glynn and Roderick Williams at Milton Court Concert Hall and Ryedale Festival, and the premiere of new monodrama Frida with the East London Music Group.
Katie Bray is particularly noted for baroque repertoire and has appeared with Barokksolistene and Bjarte Eike, Monteverdi Choir and Sir John Eliot Gardiner, La Nuova Musica, Ludus Baroque, London Handel Orchestra and Laurence Cummings, Wroclaw Baroque Orchestra, and Spira Mirabilis. She has also appeared with orchestras including the Britten Sinfonia, Royal Philharmonic Orchestra, the Orchestre Chambre de Paris, and the Aalborg Symphony Orchestra.
Recent and future highlights include concerts at the Oxford Lieder Festival, Viardot200 Festival, and with the Irish Baroque Orchestra, with the BBC National Orchestra of Wales and Jac van Steen, the Scottish Chamber Orchestra and Peter Whelan, Messiah for the Hallé Orchestra, Beethoven’s Ninth Symphony with the Royal Philharmonic Orchestra at the Barbican and a role in Garsington Opera’s 2023 Festival.
Katie Bray graduated as a Karaviotis Scholar from the opera course at the Royal Academy of Music, was awarded the Principal’s Prize and won First Prize in the Richard Lewis Singing Competition. Praised for his “dazzling virtuosity” (The Spectator), Tom Foster has a busy career as a continuo player on organ and harpsichord and as a harpsichord soloist. Respected for his sensitive and inventive continuo playing, Foster is the principal keyboard player of the English Concert and is a regular guest with The Academy of Ancient Music, Arcangelo, The Dunedin Consort, Early Opera Company, The Mahler Chamber Orchestra, The Orchestra of the Age of Enlightenment, The Scottish Ensemble and The Sixteen. These collaborations have taken him to concert halls throughout Europe, the United States, Australia, Russia and South Korea. He has performed concertos at the Edinburgh International Festival and makes his US solo-debut in recital at the Carnegie Hall in February 2020. Tom Foster began his musical education as a choirboy at Manchester Cathedral, then as a pianist and harpsichordist at Chetham’s School of Music. He holds a first-class degree in Music (BA) from St. Catherine’s College, Oxford and gained a Distinction in Performance (MA) from the Royal Academy of Music under the tutelage of Trevor Pinnock.