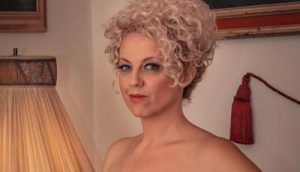 Ivana Lazar –  from the Music Academy in Zagreb, where she studied in the class of Mira Zidarić-Orešković. As the most successful graduate she received ‘Marija Borčić’ Award by MA Zagreb. the class of prof. Mira Zidarić-Orešković and as the best graduate is the winner of the award “Marija Borčić” awarded by the Academy of Music in Zagreb. She received her master’s degree in the class of Lidija Horvat-Dunjko, and she also studied with Dunja Vejzović, Konrad Richter and Olivera Miljaković. She is the winner of the diploma “Darko Lukić”, the award “Milka Trnina” – Croatian Society of Music Artists, and the two-time winner of the award “Jurica Murai” for the best interpretation at the Varaždin Baroque Evenings.
Ivana Lazar has been present on the Croatian music scene for many concert seasons, as an excellent performer of baroque, pre-classical and classical music. For many years she was the soloist of the Croatian Baroque Ensemble. She is also the co-founder of the ensemble for early music “Camerata Garestin” and as a soloist she also collaborates with the HRT choir.
With her performances, she won sympathies of the audience at the biggest Croatian festivals such as the Dubrovnik Summer Festival, Varaždin Baroque Evenings, Osor Evenings, Split Summer, Rijeka Summer Nights, etc.…
She is the lead of the Opera of the Croatian National Theater in Zagreb, where she received the “Marijana Radev” Award for the best opera performance in the 2018/19 season for the role of the Queen of the Night in The Magic Flute by W. A. Mozart. For the same role she received the Croatian Theater Award.

Pavao Mašić, winner of the Grand Prix Bach at the 2006 Bach Organ Competition in Lausanne, is acclaimed concert organist and harpsichordist with a particular affinity for the Baroque and Romantic repertoire, especially the music of J. S. Bach and French composers.

After completing music studies at Zagreb University, he pursued MA in Organ with Kei Koito in Lausanne, and in Harpsichord with Robert Hill in Freiburg. From 2008 to 2013 he participated in several masterclasses by renowned French harpsichordists Pierre Hantaї, Christophe Rousset and Skip Sempé, and from 2015 to 2018 he took part in music workshops organized by Fondation Royaumont where his mentors included Blandine Verlet, Aline Zylberajch-Gester, Pierre Hantaї, Jean-Baptiste Robin, Daniel Roth, Vincent Warnier and Thomas Lacôte.

Today he is the main organist at St. Mark’s Church in Zagreb, where he continues rich organ music tradition thoroughly documented since 1359, while pursuing rich pedagogical activity as an associate professor at the Zagreb University Academy of Music. He also performs in recitals and with orchestras at important concert venues throughout South America, Europe, Israel, and Russia. The recipient of more than thirty major awards including those at international organ competitions in Switzerland, Croatia and Spain, he was named The Best Young Croatian Artist in 2006, and in 2010 he won all three prizes (Ivan Lukačić, Jurica Murai, Kantor) at 40th Varaždin Baroque Evenings for his organ and harpsichord recitals.

His projects include concert performances of complete organ works of J. S. Bach, C. Franck and D. Buxtehude (together with organist Ante Knešaurek), Six Partitas, Goldberg Variations and The Art of Fugue by J. S. Bach, organ concertos by Poulenc, Šulek, Knešaurek and Foretić, as well as publication of the scores of complete organ works by Franjo Dugan and Anđelko Klobučar, both organists of Zagreb Cathedral. Pavao Mašić records for Croatia Records and Croatian Radiotelevision; among five soloistic albums, two of them (1685 and The Art of Fugue) received the prestigious title of The Best Classical Music Album of the Year.